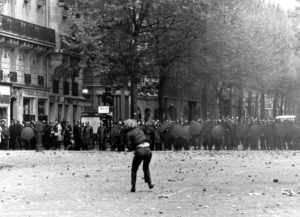 The Warp returns to the Kunstkapel with MayDays, its new season of AudioVisualSpatial multimedia performances on May 19, June 9 and June 30. Nine new multimedia performance works will be premiered in the 360 degree curved space. For this sequence of programs, multimedia artists and groups from various cultural disciplines are creating work in line with the sense of urgency that we confront with MayDays. 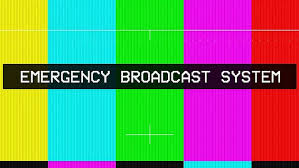 MayDays, so pluralized, is recognized as the distress signal originated by aviators and mariners though now common amonst many of those working with emergencies. The fact that MayDays is so suggestive of urgency is also ideal in the context of the fifty year commemoration of the events in Paris of May 1968 which had a world wide impact so great its legacies continue to haunt us, perhaps even more so in the face of its failure to realize any lasting result. Here was a brief moment in time when it seemed that radical change in the world was not only conceivable but almost possible. These memories must echo with the MayDays we understand to be the Spring ritual of change as well as the International Worker’s Day (inspired by the eerily prescient Haymarket riots in the nineteenth century) which only bring a stronger context to this idea and what it means to a world which has adapted itself into a nearly permanent state of crisis. Important questions for our creators are how we can reflect on a state of crisis which in its force might deny us the possiblity to do so and how, being highly inspired by the events of May ’68, we work with a concentrated level of spontanaeity. Spontaneous organization was one of the hallmarks of May ’68 and thus it will play a key role in all of the projects presented for MayDays. The important role of spontaneous creation and the experimental restructuring of all facets of the lived experience are what make the May theme so impairative for The Warp,

As always, the eclectic array of performances will invariably cross hatch theater, cinema, architecture, music, dance, literature and all manner of AudioVisualSpatial exploration in the space of the Kunstkapel. The audience once again will find itself in the center of performances which intend to upend positions and challenge perspectives. The performances will occur on three Saturdays occuring at three week intervals throughout May and June, the precise period of the events of May ’68. As always with The Warp programs each evening will be substantially different while they are arranged to function together.

Oddly enough the phrase MayDay as a distress signal does not derive from the month of May but actually from the French (!): M’Aider means Help me… 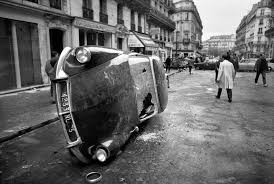 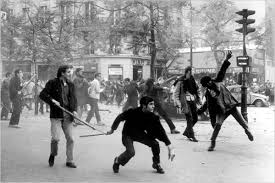 2 thoughts on “The Warp presents MayDays at Art Chapel Amsterdam”