The idea of making music theatre from the viewpoint of a composer was the starting point for [Dis]engage. The three performers’ experiences in using visuals, text, performance and sound are put to work in creating translations from one discipline to the other: a video of moving objects used as a musical score, musical elements turn into performance directions, text performed as pure sound.
The phenomenon of disengagement repeatedly appeared in trying to combine or translate disciplines. Expect all elements of music theatre in surprising constellations, with an emphasis on experimentation and lots of disengagement… 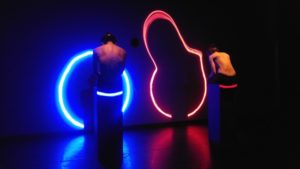 Can we measure our identity? (un)focussed is an EEG choreography in which we capture the brainwaves and movements of two performers. We compare their physical and astral bodies and translate the data in an interactive composition of movement, laser, light and sound. We all have different memories, experiences and perceptions, but when we analyze our signals we synchronize surprisingly well, showing how identically hard-wired we are. We investigate this by hacking the EEG, we use the brain frequencies to directly drive the laser and sound and in a fluid composition.

Paul Glazier examines the elusive nature of sensation and touch in Body of Vapor. The original visual material was recorded whilst the composer was massaging various people. He rerecorded these images projected upon his own body and at last he reprojects these images on that most ephemeral of phenomena, smoke. Grazier has remarked that “There is communication, something crosses over, but a lot of the experience takes place in the subjects’ own inner worlds.” 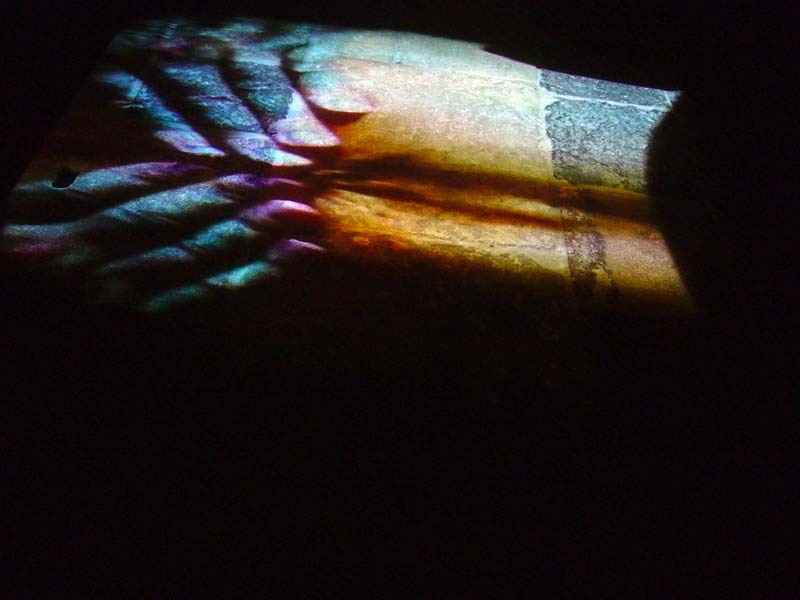 One thought on “The Monotak Ensemble: Performances In Between”